The trio met in New York City during college, finding a common thread through holistic philosophy, musical talents and work ethic. Wilbur, Muschler and McGowen are committed to environmental and agricultural sustainability-being fans of Michael Pollan’s groundbreaking book titled The Omnivore’s Dilemma, they planned a stop during their tour in 2013 to visited the farm that Pollan researched – Polyface Farms in rural Virginia. They caused a stampede, setting up and playing their song “Tubes” in the pasture, with cattle swirling in the background. (The “Cattle Dance Party” video has been viewed nearly 200,000x on YouTube). In addition, Muschler has developed a blog ‘Cooking in the Cave’ (www.cookinginthecave.net), shedding light on the band’s vegan tour-van adventures. 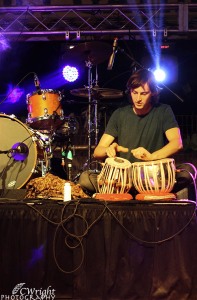 Moon Hooch is currently touring the East coast, making their way out to the Midwest in early October and finishing the third leg of their tour on the West coast. Be sure to catch a show with these guys if you get a chance, for a high-energy and lively experience. Find out more about them, their music and their current tour here: www.moonhooch.com

Chelsea Erin Wright: Where did Moon Hooch come together?

Michael Wilbur: We originate from New York City, we all went to the same music school together. It’s called ‘The New School for Jazz and Contemporary Music’. We were paying way too much money to go there, and we were really broke, so James and I started playing on the street together, just kind of swinging and playing re-improvisation, and then Wenzl had just gotten back from a cruise ship – but him and I weren’t friends at this point. I mean, he actually moved in next door to me with James who was already living there, and the only interaction that we had had prior to that, was at an audition that we were both in, and he was vibing me out really hard because we both play saxophone, and he was really intense. So, we didn’t get along. We never talked, just the vibe was bad, ya know…like whoa, this guys really vibing me. Anyway, so he had moved in next door and had learned how to produce electronic music on this cruise ship, and he and James started playing saxophone and drum-set to house beats with simple harmonies. They were kind of developing there own thing, and then one day the three of us, we ended up playing together. Wenzl told me to play an E-flat, or something close to the bass line of E-Flat, and that was then. Then Moon Hooch just existed, out of thin air. People started dancing like crazy, we started making lots of money, all at once. We were like wow this is crazy, awesome…lets do this. So we just started doing it everyday, like 8 hours a day making a decent living…way better then anyone playing a Jazz gig in a cafe’.

Chelsea: Interesting…yeah, so you didn’t have to invest tons of time to get it going. It just happened?

Michael: Yeah it just happened…I mean we invested tons of time, but all that time was playing for people, ya know. We didn’t start with rehearsing, rather we started with just playing on the street…Wenzl would write down a simple song…it’s all two lines, two part harmony with two saxophones. So, yeah we were just learning the songs on the subway platform.

Chelsea: Awesome. What is your vision as a trio?

ly somewhat of an obstacle.

Chelsea: Yeah, its always going to be separate from you..

Michael: Right, its a physical object. That you are putting yourself through, but still..ya know, I want to have more control over all of the instruments. And I don’t know any other way to put it really, than to express the cosmos through my body, in whatever way I can.

Chelsea: Yeah I do, that’s amazing.

Michael: That’s the long-run goal. To allow the cosmos to express itself through me, to have my ego step aside and let my body be the vessel.

Chelsea: A catalyst so to speak?

Chelsea: What has been your greatest success so far, since Moon Hooch has expanded in reach and reaction so fast?

Michael: It’s funny, I don’t really think of success like that. To me, success is overcoming internal weakness. Success is on a daily minute by minute basis. If I was able to see a negative feeling or energy building up inside of me and control it…not allow it to take me over, not allow it to change how I’m feeling at the core…to me that’s a huge success, ya know. To be able to actually be an observer of your internal world, and rather than letting your emotions run you, you run your emotions. It’s an age old proverb ya know…like Plato said. to be the rider of the chariot…the two horses, one passion and one reason…you have to have an equal reign on both of them. Be the charioteer.

Chelsea: That’s a great way to look at success, rather than the mainstream view of it.

Michael: Oh my god, yeah…to me, that’s not success really.

Michael: Yeah..it’s funny I was talking to Wenzl about this…yesterday, actually. We were sitting down eating this incredibly amazing meal, just chilling in the sun in Burlington. I looked at him and was like “Dude, our lives are amazing”, ya know…the funny thing is, were not rich or anything, we’re just scraping by still. But I feel so rich, because I don’t have to worry about the things most people have to worry about. I don’t have to wake up and do a 9-5 at some job that I hate. My job when I wake up is to become a better me. If people think of success as being famous, or being rich…or owning a bunch of shit…at the end of the day, no matter how much money you have, you still have to lay down in bed with yourself and deal with who you are. And no car can drive you away from that. You’re stuck with it, until you die.

Chelsea: Yeah, feeling comfortable when you lay your head down on the pillow…being able to be settled and at ease with what you are and what you do, your existence.

Michael: Right…yeah, and its a constant. Everybody has to constantly work on it…I’m sure that there are some people who were just born enlightened, or whatever you want to call it, but I feel like everybody has to actively balance the forces within yourself. The moment I think I’ve reached something, like “Okay, I’ve got it”, is the moment I’ve already lost it. Then the next day something sets me off, and because I felt like I had arrived somewhere I didn’t catch it…and then what set me off tends to take over, and I’m taken by surprise again. You have to be constantly aware.

Chelsea: Yeah. I love that saying “All that I know is that I know nothing”, you know what I mean? It’s beautiful.

Chelsea: How do you maintain your breathe for so long, playing sax?

Michael: I just focus on it.Then you kind of realize your not really maintaining the breath…the breath is just happening, you kind of let it do its own thing. It doesn’t really need your brain, you do it all the time without thinking about it.

Chelsea: Yeah, and if you do start to think about it then you have to try.

Chelsea: That’s the beautiful thing about flow…it’s that simple.

Michael: Seriously. For so many people its so difficult…for me too sometimes still, its difficult to really maintain focus on my breath at all times. It’s one of those nice constants that you can always go back to though. If you feel like anxious and your brain’s going a million miles an hour, you can just kind of bring it back to the breath…and there it is. It’s kind of like a home that’s within you at all times.

Chelsea: Yes, its sweet and simple. What are you most excited to experience at The Frendly Gathering?

Michael: I guess the show, that’s why were here. And then were going to drive for five hours tonight afterwards. We have show in Columbus, Ohio tomorrow. I’m always just excited to play music.

Chelsea: No matter how far, right…that’s the fun of it, you get to see so many different things and meet so many people.

Chelsea: Well enjoy, and it was a pleasure speaking with you. Thank you for your time.

Michael: You as well, of course.